Let me begin by encouraging pattern recognition, a cognitive skill provided us by nature with obvious survival value. But cognition is easily trumped by emotion, and fear is the most compelling emotion in nature’s survival toolkit. Consequently, nothing so empowers rulers over their subjects than its artificial production, amplification and broad transmission into contagion. When one herd member starts running, all others quickly follow. As Germany’s WWII military chief, Field Marshall Hermann Goering observed,

“Why, of course, the people don’t want war. Why would some poor slob on a farm want to risk his life in a war when the best that he can get out of it is to come back to his farm in one piece. Naturally, the common people don’t want war; neither in Russia nor in England nor in America, nor for that matter in Germany. That is understood.

But… it is always a simple matter to drag the people along, whether it is a democracy or a fascist dictatorship or a Parliament or a Communist dictatorship… Voice or no voice, the people can always be brought to the bidding of the leaders. That is easy. All you have to do is tell them they are being attacked and denounce the pacifists for lack of patriotism and exposing the country to danger. It works the same way in any country.”

In this way have citizens inhabiting “the land of the free and home of the brave” long been kept in fear for which most have willingly conceded freedom – along with civil rights, conscience, empathy, the rule of law, and independent judgment – for appearances of protection by the state. Our most important psychological functions and interactive instincts provided us by nature for survival have been disabled.

Following our gratuitous, demonstration use of atomic bombs, WWII immediately morphed into the Cold War nuclear arms “race” with the ever-present image of “a mushroom cloud” looming over us as we sheltered under school desks and in homemade back yard bunkers upon emergency test alarms.

Dread of “international communism” justified McCarthy-era civil rights violations of suspected communists and suppression of the civil rights movement including key leadership assassinations. Its imagined political contagion through a “domino effect” was used to justify mass-murdering three million Vietnamese, Operation Condor atrocities throughout South America, Iran-Contra atrocities in Central America, economic strangulation of Cuba, and overthrow of numerous elected governments worldwide that were moving toward socialism. All of these aggressions – invariably euphemized as “foreign policy” rescues of benighted peoples – have been flagrant violations of international law disregarding the 1945 UN Charter and 1948 Universal Declaration of Human Rights.

No sooner had the Soviet Union collapsed than we were promptly faced with the declared existential threat of “Islamic terrorism” personified in Saddam Hussein and his presumed terror weapons for which we terrorized the people of Iraq in the Gulf War and lionized the heroic command of General Norman Schwarzkopf while concealing our war crimes from public view. To presumably contain Saddam’s monstrous impulses, a monstrous decade of crippling sanctions followed that killed at least a half-million Iraqi children.

Lest we be allowed to relax our guard, 9/11 and the ominous figure of Osama bin Laden soon emerged to remind us to keep our weapons industry well-fed with taxpayer dollars and to remain ever-alert to terrorists among us, watching for unattended briefcases and submitting to X-rays and other intimate intrusions by government authorities as conditions of air travel. The mushroom cloud image was even resurrected to resume overt annihilation of Iraq.

Bin Laden could be officially eliminated when Isis became the proximal threat, but with control of Syria returned to its legally constituted government and Isis largely out of business, can we finally relax? Afraid not. We now have a dread virus loose in the land that can strike any of us down at any time, transmitted to us by our fellow citizens of whom we must again remain diligently watchful.

Do citizens notice a pattern here?

And this may be the worst state-imposed phobia yet. Women used to smile at me passing on the street – a pleasant, anonymous exchange. Now I see only nervous eyes peering over a mask, taking care to pass quickly with a wide berth. Encountering friends, the natural impulse to reach for a hand, an arm, a shoulder, a hug is prohibited by “social distancing” and state-imposed touch phobia.

As psychopathology, touch phobia has a name – haphephobia. It reaches deeply. We begin managing our emotional homeostasis pre-verbally during the second six months of life in response to emotional signals from our primary caretaker(s) through facial expression, voice intonations, and physical touch. These forms of contact remain fundamental to anxiety management throughout life. With lockdown directives, simultaneous with relentless inflammation of public anxiety by the media, facial expression is hidden and vocal expression muffled by masks, and touching is reduced to primary relationships where this may or may not be warm, safe or dependable. Moreover, masks have been proven ineffective to prevent viral transmission.

The importance of touch cannot be overemphasized.

Most profoundly, perhaps, satisfying touch is uniquely predictive of non-violence. Following WWII, nuclear physicists were alarmed at how their discoveries had been abused, and one of the most important studies in the history of psychology was published in The Bulletin of the Atomic Scientists in 1975, entitled “Body Pleasure and the Origins of Violence” by developmental neuropsychologist James Prescott. This study compared societal violence across 400 pre-industrial societies using cultural anthropology data. Only two cultural variables differentiated the least from the most violent cultures: generous touch in infancy and permissive practices around adolescent sexuality.

In moments of despair and helplessness we might remember the profound emotional impact of relaxing into a long, lingering hug, feeling physically supported and protected. How often has this prevented suicidal or homicidal violence?

But the government and its compliant media have inflamed public anxiety about touching. The most natural anxiety-reducer has become instead an anxiety-producer. For the 37 million Americans who live alone, these natural anxiety-reduction mechanisms are especially attenuated. Express Scripts reported 15-20% increases in prescriptions to relieve anxiety, depression and insomnia between mid-March and mid-April, and almost 80% of these were new prescriptions. Cannabis sales are up 52% to 130% compared with January at over 1,300 stores nationwide. Nearly 70% of workers claim the coronavirus pandemic is the most stressful event of their careers – more than 9/11 and the 2008 economic crash.

Something profound is involved. Transactional Analysis, established by psychiatrist Eric Berne in the 1960s to understand interacting states of mind in human relationships, identified social recognition – colloquially designated “strokes” – as a basic human need. Home confinement, social distancing, and fear of others as potential virus-bearers starves this basic hunger and predictably generates anxiety and depression. Introversion-extroversion is a reliably measured personality dimension, and of course extroverts, who rely primarily on external sources of identity-validation, are more seriously affected than introverts, who self-define more from their own thinking and activities. Psychiatrists working for Ginger – a company that provides employers with video- and chat-based mental-health services for employees (professional strokes) – wrote 86% more scripts for psychotropic drugs (strokes-to-go), primarily antidepressants, in March and April 2020 than during the two previous months.

Successful adaptation also requires reality-exploration, but fear blocks clear thinking . The need for perceived safety from an invisible menace trumps every other state of mind, disables non-emergency mental functions and narrows the range of perception. Psychotropic agents maintain preoccupation with reducing anxiety rather than examining its sources.

This raises questions that beg investigation.

What’s behind the breathless, relentless media promotion of this virus? A large majority of those infected remain asymptomatic or only mildly symptomatic, develop immunity through contracting and eliminating the virus, and never become identified “cases.” Including these – estimated from random antibody testing – with recorded cases, the case fatality rate is about one per 400 (.26%, concentrated among immunity-weakened older patients) and by further extension, vastly less than the population fatality rate. German scientists including a medical panel assembled by an interior ministry official report that nearly every death has involved serious co-morbidities in people already near the end of life with significantly attenuated immune systems. US doctors have been pressured and given financial incentives to diagnose, hospitalize, ventilate and list covid-19 as cause-of-death irrespective of these co-morbidities.

Lockdowns endanger public health. Diagnostic and preventive procedures are postponed and treatment programs interrupted, health insurance is lost with unemployment, poverty increases among the most vulnerable, depression and anxiety escalate. Unicef estimates that fatalities in developing countries due to social isolation and economic damage will vastly exceed those from the virus.

Clinically practicing physicians, microbiologists, virologists, public health physicians, epidemiologists, and other relevant scientific specialists are widely questioning the scientific integrity of Dr. Fauci, the CDC, the WHO, and leading medical journals (Lancet, NEJM, JAMA) that have recently, shockingly, published grossly misleading research papers – based on data from no documented sources and potentially lethal overdoses of hydroxychloroquine administered at the wrong stage of treatment – in obviously deliberate attempts to discredit the early-stage treatment efficacy of this inexpensive, safe, and already available drug. Two of these papers were quickly withdrawn and the third appears based on malpractice causing iatrogenic deaths that required early termination of the study.

Dr. Fauci knew by February that the covid-19 CFR would be very low, less than 1%, and published this in the NEJM on Feb 28, 11 days before the economically disastrous lockdown that he allowed while promoting public panic. 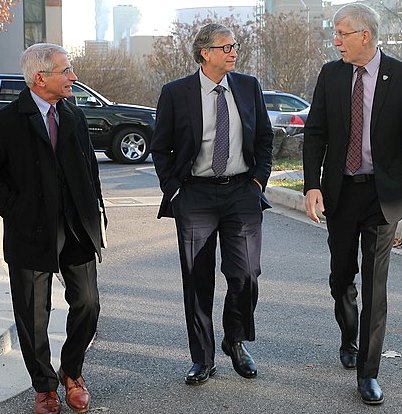 A homicide detective first asks, cui bono? In French murder mysteries, the first hypothesis is cherche la femme. My first hypothesis here is cherchez l’argent. I would connect the following: TV news has been deluged with covid-19 stories, and Big Pharma is often the #1 TV advertising revenue source. In 1980 Congress granted government scientists patent rights for their taxpayer-supported research products, a right Dr. Fauci has exercised. In 1986 Congress granted vaccine manufacturers immunity from liability, which has made long-term safety testing unnecessary since vaccine damage lawsuits are now defended by the federal government – but under our declared “public health emergency” even the federal government is now immunized. The CDC receives indispensable funding from the Gates-founded Gavi Alliance and Gates-supported Emory University CHAMPS Network ($9 million in 2019). The Gates Foundation and Gavi Alliance together contribute more to the WHO budget than any nation other than the US and about equal to the UK. Bill Gates envisions “almost everybody vaccinated globally” before the world economies can be safely unlocked.

But if inexpensive, effective and already available prevention and treatment options have been widely used and proven effective by medical practitioners worldwide, there is no need for a vaccine or other new Big Pharma profit centers. That simple truth is being desperately concealed.

There’s much more to investigate, including the source, peculiar characteristics and early distribution of this virus, early understanding of it that was withheld from the public, inexcusable misallocation of medical resources, and why the vastly greater public costs and deaths resulting from economic constriction were ignored. If the full truth is ever unearthed, I suspect the event will be comparable to 9/11 – creating population-wide fear to justify increased government intrusion upon civil rights while quickly transferring massive wealth from the agora to the castle and enriching a major industry with massive lobby power.

If covid-19 isn’t a dehumanization experiment with several dark objectives, why does it look that way, evoking the dystopian visions of both George Orwell (1984) and Aldous Huxley (Brave New World)? We seem thrust ever more deeply into an age of both Newspeak and Soma that we must reject as a “new normal.” Our societies must instead return along the opposite path toward re-humanization.

View all posts by Admin